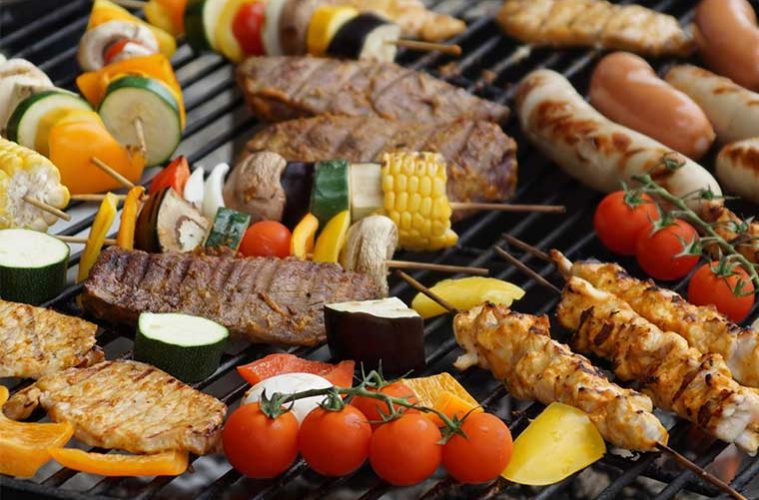 Three ways to cook outside

Cook Outside | Finish a day spent enjoying the sun and warmth of a British summer (however long it lasts) with an alfresco meal. Cooking outside is as synonymous with our summer months as wasps.

Two thirds of people in the UK own a barbeque grill, but most won’t know that the word comes from the word barbacoa, a form of cooking meat that originated in the Caribbean. The barbeque (BBQ) and home-eating and entertaining, is now the UK’s Number 1 summer home leisure activity according to National BBQ Week

In preparation for 2018 National BBQ Week later this month (28 May), we look at three ways to cook outside.

In history, the kitchen and its integral appliances have been seen as a woman’s domain. The BBQ is the ultimate man-kitchen, particularly when it has the dials of a spacecraft cockpit and opens like the gull wings of a Lamborghini or the Delorean.

From a simple, solid-fuel disposable tray to the kitchenette that includes grills, griddles, gas burners, preparation tables, sauce shelf and a bottle owner, BBQs come with choice. Some come with hooks too. No clear requirement for these – they’re too low for hanging game, but they look the part – the BBQ equivalent of punk.

Bring the authentic taste of Italy to your home, with a wood-fired oven. Traditionally, wood is burned either below or on the cooking area and food cooked simultaneously, or when the fire and coals have been swept out.

The pizza oven is quickly becoming the must-have garden gadget and you can choose from wood, coal, gas and even electricity fuelled versions.

Whether free-standing or a permanent garden building, it’s got to be better than ordering in, right?

If you have a traditional fuel BBQ, you can go for a suitable pizza stone to transform your grill into a pizza oven. This doesn’t work on gas BBQs.

Cook Outside on an Open Fire

It’s a strange phenomenon how an open fire can awaken the inner Neanderthal. For many, alfresco griddling thrills the heart of the hunter.

There are many fire pits that make cooking over an open flame safer than it once was. They’re not just for cooking on either – fire pits are becoming a focal point for outdoor living and contemporary designs to be surrounded by rattan seating are starting to sell more widely.

We wouldn’t recommend cooking on such an expensive piece of functional art, even if it does add warmth to a chilly evening, but the good news is there are plenty of less expensive fire pits perfect for browning bangers.

Food tastes better when you cook outside.