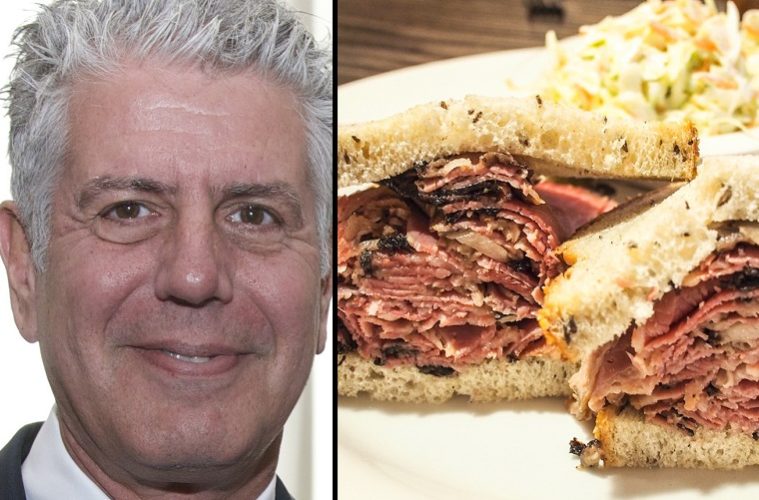 Pastrami on rye and a warthog anus: the food of Anthony Bourdain

Chefs the world over were shocked when American celebrity chef Anthony Bourdain was found dead in his hotel room last week (8th June).

The author, travel documentary maker and television personality was considered “influential” by peers and commentators alike.

Anthony Bourdain was a master — with food, and with language. This is the story of his life in his own words. https://t.co/2kjHc3REt6 pic.twitter.com/ehjsyVR0R8

A committed carnivore, Bourdain was known as a meat lover, and a self-styled “culinary bad boy”. He once described pork as his “favourite vegetable”. He delighted eating from the less-mainstream end of the food menu, trying raw seal eyeball in the Artic and sheep’s testicles in Morocco. He said the most disgusting things he’d ever consumed were unwashed warthog anus and a chicken McNugget.

Bourdain once shared food and chat with Barack Obama in Vietnam, and the former US President tweeted:

“‘Low plastic stool, cheap but delicious noodles, cold Hanoi beer.’ This is how I’ll remember Tony. He taught us about food – but more importantly, about its ability to bring us together. To make us a little less afraid of the unknown. We’ll miss him.”

“Low plastic stool, cheap but delicious noodles, cold Hanoi beer.” This is how I’ll remember Tony. He taught us about food — but more importantly, about its ability to bring us together. To make us a little less afraid of the unknown. We’ll miss him. pic.twitter.com/orEXIaEMZM

Unlike many chef-written recipe books, Bourdain’s recipes use few ingredients and are uncomplicated to cook, and serve. His casual cooking style is probably testament to his own suggestion that he wasn’t actually a good cook. This culinary globetrotter can be credited with creating the food travel show in its popular form, and is revered as a full-time elder statesman of world food.

In 2016, Bourdain posted an Instagram photo of a pastrami sandwich from Pastrami Queen, in the Upper East Side of Manhatten. The Wall Street Journal named Pastrami Queen one of the best places to get NY’s signature sandwich.

“Straight off the plane. 10AM. The joys of travel are many, but sometimes there’s no place like home. #PastramiQueen #NewYorkMotherf—inCity.”

Pastrami Queen’s most recent post was in memory of Anthony Bourdain. “@anthonybourdain always had great things to say about our restaurant… It is with the heaviest of hearts that we say goodbye to our dear friend. We grew so used to seeing Tony when he came home to NYC after traveling [sic] abroad. We wish we could welcome him home just one more time. RIP Chef, you left us too soon.”

In honour of Anthony Bourdain, here’s the ultimate pastrami on rye: