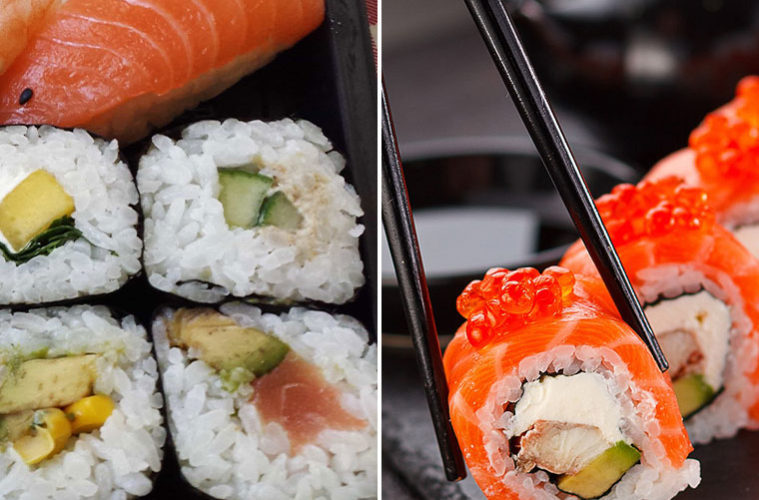 June 19th is International Sushi Day, when we celebrate the famous Japanese dish that actually originated outside of Japan.

Surprised? This pocket guide lifts the lid on the myths that surround this cultural dish.

YOU CAN’T BUY HAPPINESS BUT
YOU CAN BUY SUSHI 🍣, WHICH IS
KINDA THE SAME THING #InternationalSushiDay pic.twitter.com/fMlbSW3FSn

Sushi is not originally Japanese

The word sushi is synonymous with Japanese culture and yet the inspiration of the dish is believed to have started in southeast Asia, somewhere around the Mekong Rover, before spreading into China and later Japan. Nare-zushi, fermented fish wrapped in sour rice, is the forerunner and our modern-day concept of sushi was invented in Japan sometime in the mid 1800s.

It's #InternationalSushiDay, folks! Grab those chopsticks and get feastin' on some rolls of goodness & tell us what’s your favourite type of sushi? pic.twitter.com/W61AaoFpMY

The wrapping of sour, fermenting rice around fish was originally only to aid in the process of creating umami – a unique, sour taste. Once the fermentation process was complete, the rice was discarded and only the fish consumed. The fermenting rice also helped to preserve fish and to protect it from flies. Today, preparing the vinegared rice used for sushi is considered as important as preparing the fish itself.

This dish originally caught on as a cheap, quick snack. That’s a far cry from the sushi creations of Filipino chef Angelito Araneta Jr, or to give him his nickname, the Karat Chef, who likes to incorporate precious metals and stones in his sushi. His five-piece special nigiri roll is officially the most expensive sushi in the world, according to Guinness World Records. Premium pink salmon and foie gras, wrapped in 24-karat gold leaf, three Palawan pearls on each piece and 20-carats of African diamonds. Enjoy this for just $1,978.

Bluefin Tuna is a prized ingredient. Once considered cat food, the highest price ever paid for a sushi grade Bluefin Tuna was $396,000 for a 342kg fish ($1,158/kg) in January 2011 at the Tsukiji Fish Market in Tokyo.

You shouldn’t use chopsticks

Sashimi (slices of fish with no rice) is typically eaten with chopsticks, but the correct way to eat sushi is with your hands, by lifting a piece between your thumb and middle finger. Picking up the sushi allows you to feel the texture and prevents damage from the chopsticks.

Turn the piece upside down by rotating it anticlockwise and place the sushi pieces in the mouth upside down so that the fish is against your tongue. This allows your taste-buds to sample the complex flavours. Eat the entire piece in one bite, as trying to make it last two bites usually results in it falling apart.

Ensure your fingers are clean – some sushi restaurants will provide a wet towel, which should never be used on your face.

Pour only a small amount of soy sauce onto your plate or into your bowl, and add more if you need it. Wasting soy sauce is taboo in serious Japanese dining etiquette. It also suggests that you suspect the fish is old and needs flavouring, even before you try it. The same applies to wasabi. It’s an offence akin to slathering your prime steak cut in ketchup.

There’s etiquette to be observed

Sushi isn’t just a meal – it’s a cultural experience, and observing the etiquette is a mark of respect to the sushi chef.

If you’re using soy sauce for dipping, only dip the fish, never the rice. Rice absorbs too much soy sauce which changes the flavours and texture. It’s considered amateurish to leave rice in your bowl. Sushi pieces such as unagi (eel) and those with sauce already on top should not be dipped.

The only time it is permissible to mix wasabi and soy sauce together is if you’re eating sashimi.

Sushi masters are artists of their craft

This fast food has evolved into a culinary art.

It takes decades to make a master sushi chef, so interact with respect. If you’re sitting at the counter, address your chef only when necessary but do ask for recommendations. Traditional sushi chefs will reward your interest and trust in his recommendations with extra care. Don’t distract the artist at work – questions and small talk can distract, not ideal when working with sharp knives (which are sharpened every day).

Fugu, or pufferfish, contain lethal amounts of poison in its glands and organs. If a chef inadvertently scrapes one with a knife while preparing sashimi, he could potential kill his own customer. To be certified to work with fugu sashimi, chefs in Japan must undergo a rigorous training and certification process, then eat their own finished product! And yes, there have been deaths during the final exams.

If you offer to buy the chef a shot of sake (pronounced sah-keh), and he accepts, you should have one with him. Tradition once dictated that sake should be finished in one shot – that’s why the cups are small – and you can say cheers with kanpai! (gahn-pie). Kanpai translates as empty cup, an equivalent to the Western “bottoms up”. If he declines your offer, simply bow respectfully.

Never attempt to had money to the chef: they work with food all day and should never attempt to touch money. Besides, tipping is rare in Japanese custom and can be offensive.

Check out our user submitted recipes.