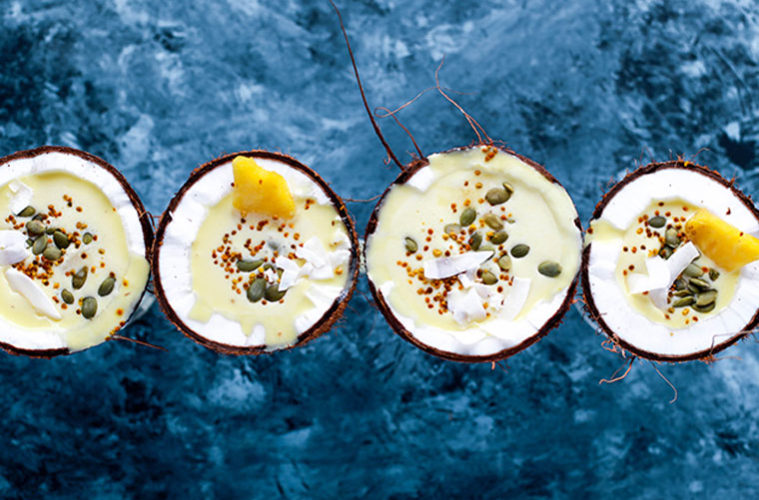 Piña Colada Day is observed every 10 July. It’s a day when we celebrate this delicious rum-based cocktail and its 1980s razzmatazz garnish of paper parasols.

The drink was allegedly invented in a hotel bar in Puerto Rico in 1952, as a way of giving tourists a literal taste of the Caribbean, although the first written reference dates to 1922, albeit without coconut. The cocktail’s key flavours are rum, pineapple and coconut, but with so many variables of each signature ingredient, which should you choose?

We peel back the carnival float appearance of this once-glamorous and look at the premium ingredients that create this totally tropic taste.

Rum is an alcoholic drink made from sugarcane by products, distilled into a clear liquid and aged in oak barrels. Although rum is produced across the world, including in Fiji, Nepal and Taiwan, the majority of the world’s production occurs in the Caribbean and Latin America. The drink has a significant part in the culture of the West Indies islands as well as in maritime history, British Navy and pirates alike.

Rums are produced in different grades. Light rums are often used in cocktails and golden or dark rums which were traditionally drunk straight (neat) or on the rocks are now often consumed with mixers.

For your piña colada, white rum will permit the coconut and pineapple flavours to dominate the drink whereas a richer or more aged rum will turn the emphasis on the alcohol. Some recipes recommend an even mix of light and dark rum, or dark and coconut rum. Golden rum is a good middle ground.

Although the name piña colada means strained pineapple, referring to the fresh, pressed flesh of the fruit, it is not essential to use fresh fruit in your cocktail.

Pineapple juice makes an excellent alternative, saving time and if it’s a little too sweet, a dash of lime will balance out the taste. Unless you’re a purist, or have time to spare, save the fresh fruit flesh for your garnish.

The original piña colada uses a Puerto Rican product known as Coco López cream of coconut. Coconut water makes the drink much lighter in texture but may be too subtle for the balance of flavours needed for this drink. Coconut milk, if well blended, makes an excellent alternative.

If you need to sweeten your drink, use sugar syrup, made by boiling two parts sugar with one part water until dissolved. And it’s more is more with the piña colada garnish: pineapple wedges, maraschino cherries are practically expected.

To make the perfect Piña Colada: