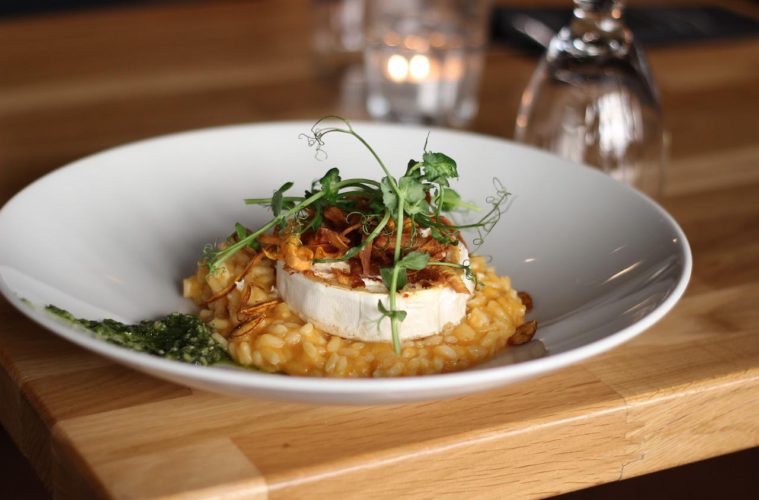 The Italians are known for their exceptional food, and the risotto dish is no different. Originating from Northern Italy, risotto is the perfect meal choice for all seasons alike. Whether you’re soaking up some rays in your garden, or you’ve just returned from a frosty walk in the winter-cold. Its light and creamy texture never fails to satisfy. And as such, we’ve collated three risotto recipes to suit all dietary preferences. Whether you’re a meat-lover, vegan or pescatarian, you’re sure to swoon for one of these recipes.

Add some variety to this traditionally Italian dish with an infusion of Mediterranean flavours with chorizo. A meal so rich in taste you’ll wish you made enough to last you all week.

To begin with, chop up some chorizo, garlic and shallots (or brown onions if you don’t have any) and some parsley (optional). Pop them all in a pan with enough oil to cover the base of the pan. Fry until your chorizo is beginning to crisp up (this should take around 5 mins).

In another pan you want to be heating up some chicken or vegetable stock with plum tomatoes.

While your stock mixture heats up, pour some rice (arborio rice) into the chorizo-shallot mix, and cook on a high heat till the rice begins to go translucent at the ends. Then,you can add in some red wine (about 100ml) for taste, until it’s evaporated (optional but recommended).

Once the wine’s evaporated, add in your tomatoey-stock a bit at a time to your pan of rice, topping it up each time the previous amount evaporates. Until eventually, you should have a soft, creamy pan of risotto. For extra taste, add in some parmesan to the mix and sprinkle some extra on top after you’ve dished it up. And as ever, always make sure you season with some salt and pepper.

Quantities for 2: 1 shallot, 1 garlic clove, 40g chorizo, few stems of parsley, 325ml of stock, half a tin of plum tomatoes, 150g arborio rice, 100ml red wine and however much parmesan you fancy.

The base for any risotto is pretty much the same. So, to begin prep in the same way as the chorizo risotto, you want some shallots or brown onions, garlic cloves, but instead of chorizo, mushrooms! Fry all these together in a pan with a dollop of oil or butter till they’ve softened.

Once again, stir in your arborio rice and keep it cooking till they’re showing some translucence. And in a separate pan (or jug) you should be prepping some vegetable stock.

When the rice seems ready, begin pouring the stock slowly and a section at a time. Make sure you stir the mix in between pours and add some more when the stock begins dissolve. You can do it by ladle if you like, but I prefer to add it in bigger portions.

Until eventually, you should be left with some creamy, al dente rice (definitely give it a taste to make sure it’s cooked enough). If you find yourself wanting more mushrooms, you can add extra, just make sure they’re cooked through. And finally, add in some cheese of your choice, whether it’s parmesan or vegan, it’s always a great addition. Or if you’re not a cheese person, you can leave it out, it still tastes great.

Don’t worry pescatarians, we didn’t forget about you. We’ve got the perfect pescatarian friendly risotto dish to help you unwind at the end of the day.

Prawns cook quickly, so you’ll want to leave this till the end. Just add in some garlic and shallots to begin with to your pan. Then after a couple of minutes, mix in your arborio rice. Then it’s time to add in your vegetable stock, keep adding it in until your rice has expanded, and the stock has absorbed.

Once it’s all dissolved, add in some cherry tomatoes and half a can of chopped tomatoes. To help with the tanginess of the tomatoes, add some sugar to offset it a little bit and a sprinkle of paprika. Let it simmer for around 10 minutes, at which point you want to stir in your prawns.

Cook the prawns in the mix for roughly 3-5 minutes until they’re thoroughly cooked but not too tough. Mix in some cheese, garnish with some basil, and finally dig into your pescatarian heaven!

Quantities for 2: 1 shallot, 1 garlic clove, a glug of olive oil, 150g arborio rice, 75g cherry tomatoes, half a tin of chopped tomatoes, ½ tsp of sugar, ½ tsp of paprika, 150g of prawns (or more if you prefer), a handful of basil and some cheesy goodness.